Robinson Did New Zealand Proud at the FIS World Cup 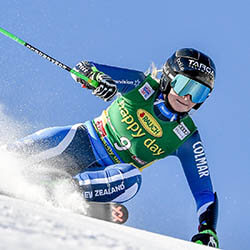 Shiffrin was in remarkable form, holding a lead of .61 seconds after the first run while Robinson’s 2.27 seconds left the Kiwi languishing in 18th place. But the second run saw her leap up the rankings, and Robinson was fifth fastest on this one. She was just .27 seconds behind Shiffrin, putting her in ninth position overall.

Robinson explained that the track was a new one for her and that she felt she’d not done very well on the first run, saying she’d made many mistakes. She said the second run was decent, however, and she felt she’d skied it well. She said she just slightly behind and the fact that she’d made up several spots made her happy. She stated that she planned to build on this for upcoming races.

The World Cup Giant Slalom points table sees Robinson staying in sixth place while Shiffrin moves up two, to second, behind Federica Brignone of Italy. The New Zealand skier will next be taking part in the World Cup in Sestriere, in Italy, on the 18th of January next year.