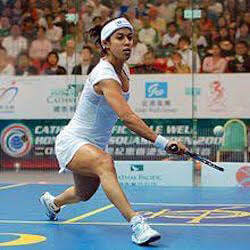 The 2017 World Squash Championship is scheduled to entertain online sports betting fans from December 9 to 17. If Malaysian star Nicol David can win the women’s tournament for the ninth time, she’ll have a strong claim on the sport’s greatest-of-all-time title.

No female player comes close to her world championship record, and in the men’s game, only one player has ever matched her. That was Pakistan’s legendary Jansher Khan, who took the title eight times between 1987 and 1996.

In that decade, one of his two losses was to fellow Pakistani Jahangir Khan, whose six titles put him second in the men’s record books.

David is already considered the GOAT in the women’s game by many. If she surpasses Jansher Khan’s record, there’s no reason the suffix ‘male or female’ shouldn’t be added to that accolade.

Cherry on Top of Stellar Career

If she can take this year’s women’s championship, it will also be David’s crowning achievement in a career packed with major triumphs, including another record nine Asian Squash Championship victories and a 51-match, 13-month winning streak while she was world No. 1 in 2006-7.

She first won the world championship in Hong Kong in 2005, beating Aussie Rachael Grinham in the final. The next year in Belfast, it was Rachael’s little sister Natalie’s turn to finish runner-up to the Malaysian powerhouse. The Grinham sisters came up trumps in 2007, with Rachael beating Natalie in the Madrid final.

From 2008 to 2012, however, Davis was unstoppable, taking five titles on the trot. She took her eighth victory in 2014, beating Egypt’s Raneem El Weleily in a hard-fought five-set marathon in Cairo.

Malaysian squash fans will be particularly keen to follow David in Manchester. With men’s national champion Ivan Yuen out of the world championship and undergoing treatment for unexplained chest pains, David is one of the top Malaysian players left in contention.