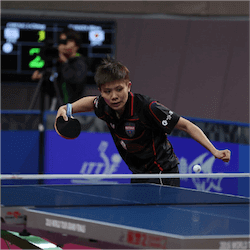 This year, the event will be played in Astana, Kazakhstan.  The top 16 men and women from the 2017 Table Tennis World Tour will battle it out for the prize pool of $1,000,000.00, with only the best in the world being afforded an opportunity to compete in the finals.

The final list of this year’s singles as well as doubles games competitors has been confirmed and includes top notch players like Timo Boll, Bo Fang and Ying Han.

No Country For Old Men

Teenagers Tomokazu Harimoto and Miu Hirano have both qualified to play in the 2017 ITTF World Tour Grand Finals.  14 year old Harimoto will be playing thanks to having automatically qualified, as will Miu Hirano.

World number 6 Jun Mizutani did not qualify due to his not having met the minimum requirement of competing in at least five of the tour events.

The qualification criteria for the finals competition are very strict and have always been.  The criteria are as follows:

The qualification criteria for the doubles events are as strict as those that apply to the singles events.  The same doubles pair has had to play at least 4 World Tour events in order to qualify.