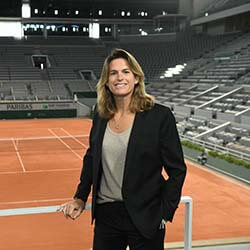 After Guy Forget tendered his resignation from the role, Mauresmo’s name had apparently immediately cup up in terms of a possible replacement. The FTF’s announcement regarding Mauresmo followed only two days after Forget’s resignation became public. Forget had filled the role since 2016, and had previously coached Lucas Pouille and Andy Murray.

Mauresmo recently commented on the drama surrounding Chinese tennis star Peng Shuai. She told a prominent tennis magazine how freedom of speech, and especially the freedom of speech of women, are important subjects for consideration in a modern sports world.

The WTA took a significant stand against China when the organisation recently announced the immediate suspension of all tournaments and events scheduled for China in 2021-22. According to WTA CEO Steve Simon, with the complete and unanimous support of the WTA Board of Directors, he could not in “good conscience” expect of athletes to compete in the country while Peng Shuai wasn’t even permitted to speak freely.

Simon also said he remained concerned about the safety of the WTA’s players as well as its staff if tournaments and events were to be continued in 2022 in China.

As for Mauresmo’s plans for the future and for that of the French Open, the legend said she planned on getting down to starting her new job with vigor as soon as possible.