AO Will Be His Final Bow Says Dylan Alcott 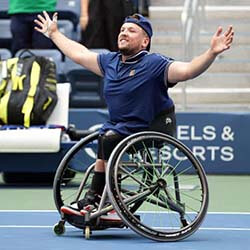 Dylan Alcott, a man widely regarded as one of Australia’s greatest tennis players of all time, has announced that he’ll be retiring after next year’s Australian Open.

Alcott earlier this year became the first men’s player to earn a calendar year Golden Slam in all four major titles – as well as Paralympic and Olympic gold. He announced his upcoming retirement on Tuesday, while adding he regards it important to make a last final appearance in his home town at Melbourne Park.

Alcott said finishing his career at the US Open – where he once again reigned victorious in the 2021 edition of the event – simply wasn’t an option to him, as the US wasn’t his home. He said the Australian Open wasn’t just his home tournament, but that the competition had completely changed his life.

The Aussie said he had known he would announce his retirement since quite some time ago. He said while he loved the game and would continue to do so, the time has now arrived for him to pay attention to other things happening in his life right now.

Alcott also thanked young Dutch star Niels Vink for pushing him to his limit in this year’s US Open final at Flushing Meadows. He said he believes the time has arrived for him to allow the next generation of players to start earning the recognition they so clearly deserve.

The champion player’s career started out on the wheelchair basketball court, during which time he won Paralympic silver and gold medals for Australia.