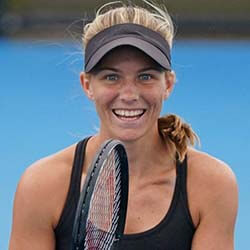 Local wildcards are currently running the show at this year’s Australian Open, with Maddison Inglis continuing the streak on Tuesday as she sent US Open finalist Leylah Fernandez packing in a first-round topple at Melbourne Park.

Inglis, who is 24 and from Perth, made quick work of wrapping up the victory over No. 23 Fernandez. It took just 82 minutes to secure the stunning 6-4, 6-2 victory over the Canadian.

After dashing her way to a 4-0 lead during the second set, the Aussie held her nerve for seeing through a marathon sixth game while saving a string of break points on her way to an ace.

The victory marked Inglis’ first at a Grand Slam after four previous attempts. Inglis will next face either France’s Caroline Garcia, or US qualifier Hailey Baptiste as she progresses to the second round.

But Inglis wasn’t the only Aussie making locals proud, as 2011 US Open winner Samantha Stosur pipped US wildcard entry Robin Anderson to the post with a 6-7, 6-3, 6-3 victory.

Meanwhile, for defending champion Naomi Osaka, it was pretty much business as usual as the Japanese star registered her 23rd victory in 24 matches played at Melbourne Park when she beat Columbia’s Camila Osorio 6-3, 6-3.

Ranked No. 13 after an interrupted 2021 season due to mental health challenges, Osaka wasted no time at all racing her way to a 5-0 lead before securing a win in only 68 minutes. Osaka will next play Madison Brengle of America in the second round.