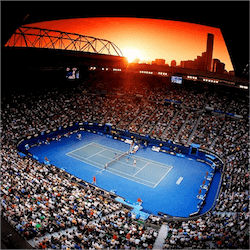 AO Too Hot to Handle

Complaining about the weather is quite normal in the everyday swing of things.  We all do it at some point.  Some of us even use flippant conversations about the weather to stave off uncomfortable social situations.

But playing a game of competitive tennis in temperatures pushing the mercury into a sweltering-hot 42 degrees celsius?  Now that’s what we call an uncomfortable situation involving the weather.  Just ask former world no. 1 Novak Djokovic.  Djokovic reportedly requested a change in time slot, from evening to afternoon, for his match against Gael Monfils on Thursday, but soon regretted the change of plan.

Despite the blistering heat, Djokovic still managed to beat his opponent 4-6, 6-3, 6-1, 6-3, but said afterwards that the heat had risen to levels that were just about all he could take.  He expressed grave concerns about health-concerns associated with physical excursions in temperatures of this nature, describing the heat conditions as having been brutal.

His French opponent was seen to be swaying across the court between struggling to return balls.  Monfils also reportedly told the chair official to forget about imposing the new rule that stipulated that players now had to serve within the time frame of 25 seconds between points.  After the match, Monfils told the press that he was convinced that he had contracted heat stroke on the court.

Holding Back On Coverage

All courts are equipped with roofs that can be closed when the conditions become too extreme and start to affect the well-being of players and spectators.  Rafael Nadal posed the real million-dollar question when he enquired as to why the roofs were not being utilised to serve the purpose that they had been constructed to do, when the need arose.

And the need certainly arose on more than one occasion on Thursday.

Djokovic was so miffed at having had to play in the extreme weather conditions that he urged officials to rely on common sense instead of complicated calculations dictating when it was time to run for cover.

Ever practical, Djokovic said that he realised that there was the issue of tickets having been sold, but that sometimes it was necessary to make a call about postponing a match for a few hours in order to protect the players and the spectators who were paying for those tickets to watch the players play tennis.

In the words of Monfils, good luck to those who will be continuing to play in even hotter conditions as the tournament progresses.