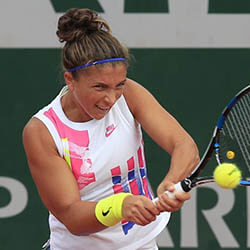 Italy’s Sara Errani – a 2012 French Open runner-up – says she didn’t “buy” Kiki Bertens’ claims of cramps bad enough to justify being wheeled from a Roland Garros tennis court in a wheelchair. She also appeared to mock her opponent’s cramps and even went as far as refusing to tap racquets after the game.

Bertans had to exit Roland Garros’ Court 14 with the help of a wheelchair following a second-round victory over Errani – this after she was seen collapsing to her back on the clay. Bertens checked in later on social media claiming to have been treated for cramping in both her hands, her right foot, and her left leg following the collapse.

Errani has since the incident made no secret of the fact that she considered Bertens to have been acting. Winning is winning, said Errani after the match, but it should be free of “all this acting”. What appeared to make the Italian player even more suspicious of the authenticity of Bertens’ actions on the court was the fact that she noticed her in the player’s restaurant about an hour after the match had ended – and said that she looked “absolutely fine”.

Errani did however say that she thought the Dutch national had played an incredible match, but that what she did not appreciate had been the situation with the acting out of supposed cramps. Bertens’ attitude while on the court had not been all that good, explained Errani.

Bertens has since responded by insinuating feelings of frustration on Errani’s part – all as a result of her having lost the match.