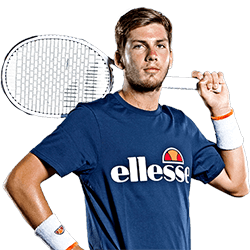 British second seeded Cameron Norrie has advanced to his first ATP final after beating German Jan-Lennard Struff during the semi-finals of the Auckland International.

The 23 year old player claimed a victory of 7-5 4-6 6-4 playing in the city where he grew up before he moved over to the Britain in 2013. Norrie, who is currently ranked 93 in the world, is set to take on American Tennys Sandgren – world number 63 – in the final of the tournament.

Norrie has become a favourite for Britain now that Andy Murray has announced his retirement for the sport, and many hope that he will start seeing more successes now that he’s begun his maiden campaign, where he will be playing at Melbourne Park against Taylor Fritz. Norrie previous beat Fritz in the quarter-final of the ASB Classic in Auckland.

Having been born in South Africa before moving to New Zealand as a toddler, Norrie was forced to change his allegiance at the age of 16 due to some financial problems. The left-hander lived and trained at the National Tennis Centre in Roehampton, located in London for three years as a teenager. He then was given a scholarship to the Texas Christian University, and peaked in 2018 when he climbed to the 66th rank in the world – making it his best to date. His best game yet was against Spanish Roberto Bautist Agut, where he made an excellent debut on Britain’s Davis Cup team.