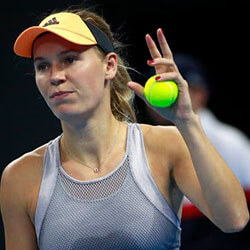 Caroline Wozniacki, former world number one, has announced that she will be officially retiring from the sport after the end of the Australian Open in January. The 29 year old is currently 27th in the world, and had last competed in the China Open that took place in October. The player had been diagnosed with rheumatoid arthritis last year, and would eventually go on to enrol at Harvard Business School earlier this year, making plans for her times after her professional tennis endeavours come to an end.

Despite this, the Danish player has stated that her retirement is not linked with her health, and that this isn’t her last goodbye. As part of a long Instagram post, the Australian Open winner said that she plans to focus on her life way from the sport, which includes starting a family with former Golden States Warrior player David Lee, her husband.

Wozniacki’s career consists of 30 WTA singles titles, along with reaching the rank of world number one in 2010, coupled with a WTA Finals victory and competing in a total of three Olympics. In her social media post, the player said that she had been playing professionally since she was 15 years old, and that she experienced an amazing first chapter of her life, and accomplished everything that she had ever dreamed about. She lastly added that she wanted to thank her fans, her friends, her team, and her sponsors, saying she could not have done it all without the support.