COVID-19 Forces Coco Gauff To Withdraw From The Olympics 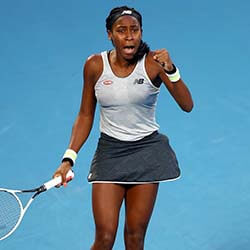 We are days away from the Tokyo Olympics, and American tennis star Coco Gauff has been forced to withdraw from the games after testing positive for COVID-19. The 17-year-old took to Twitter to make the announcement on Sunday. She has not indicated when she received her results, although her last competition was on 6 July against Angelique Kerber.

The tennis competition of the Olympic games is set to take place in the next six days at Ariake Colosseum. There will be no spectators given the pandemic’s restrictions. The sudden withdrawal of Gauff has left the U.S. Tennis Association running around looking for an alternative. They are yet to make an official announcement.

The world of tennis has experienced a lot of COVID-19 related drama, especially with the upcoming Olympic games. Top tennis players Serena Williams, Simona Halep, Rafael Nadal, Sofia Kenin, and Roger Federer had previously stated that they will not be competing in the games as a result of the pandemic.

Gauff was set to join Jessica Pegula, Alison Riske and Jennifer Brady in the singles matches. For the doubles tournament, she would have played alongside Nicole Melichar.

While competing at Wimbledon, she mentioned that deciding to compete was easy. She added that her mother had also competed in the Junior Olympics back in the day. Watching the Olympics is a family event for her, and everyone is glued to the TV, watching everything. She hopes that although she cannot compete this year, that she will be able to compete in future games.