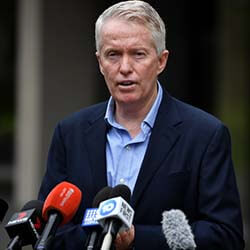 Craig Tiley, chief executive of Tennis Australia, has said he will not resign over the visa saga involving world No. 1 Novak Djokovic. Tiley said he did nothing wrong. He also strongly denied the allegation that Tennis Australia had footed Djokovic’s legal fees for fighting the withdrawal of his visa.

Tennis Australia currently faces a great deal of scrutiny from players worried about the testing protocol followed by the organisation. Players are worried the voluntary testing protocol might be exposing them to risk.

Tiley was booed by the crowd during his appearance at Samantha Stosur’s final singles match at Kia Arena on Wednesday. He later during a press conference with Nine Network avoided questions about his organisation’s push to bring Djokovic to Melbourne Park while being fully aware of the player’s unvaccinated status.

Tennis Australia, in the meantime, issued a statement of its own on Monday night. According to the board, the organisation supports Tiley and his remaining on as tournament director and CEO. The statement did however acknowledge that certain lessons needed to be learnt from the entire ordeal.

The allegation that Tennis Australia had stood in for Djokovic’s legal fees bill, which is said to have come to around $500,000, had been made by former Brighton mayor John Locco. Tiley said this week that while it’s never the norm to reveal details regarding the financial arrangements with players, the allegation made by Locco wasn’t true.

The 60-year-old said he has no intention to resign from his role.