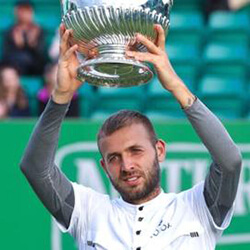 British Dan Evans has won the Nottingham title after his latest win against Evgeny Donskoy of 7-6 (7-3) 6-3. Top seeded Evans lost three set points before he managed to take the first set tie break, breaking to love in the decisive eighth game of the second set.

Evans ha won a total of 10 straight matches after he took the Surbiton title. The 29 year old is set to take on three-time grand slam winner Stan Wawrink for the first round of the Queen’s. The British player, who is currently world number 70, was banned from the sport for the entire of a year in 2017 due to cocaine use, but has already been assured a main draw slot in Wimbledon.

Although Evans is behind compatriots Cameron Norrie and Kyle Edmund in terms of the world rankings, which takes into account the last 12 months, he remains Britain’s best male player based on his results from the 2019 season so far. France’s Caroline Garcia justified her place as top seed thanks to a victory over Croatian Donna Vekic for the Nature Valley Open women’s final.

The world number 28 returned from a set down to win 2-6 7-6 _7-4) 7-6 (7-4), ending the game in a total of two hours and 39 minutes. The women’s final that takes place at Nottingham is a Tour level event; the men’s draw is part of the second tier of the international Challenger series that is underway.