Federer Does It All And In Record Time

Roger Federer A Man On The Move 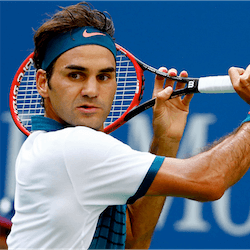 Roger Federer doesn’t beat around the bush; that much is for sure.  He spoilt his home fans with a stellar but speedy performance on Thursday when it took him all of 57 minutes to beat Frenchman Benoit Paire en route to the quarter-finals of the Swiss Indoors tournament.  The 6-1, 6-3 end result was a typical Federer smashing.

Federer did not have to face any break points and finished off the battle with a forehand winner.  Benoit Paire is well known for being a highly unpredictable player and he did give Federer a hard time during the initial opening service game.  This soon subsided however as Federer started leaning into the match.

Federer is currently chasing his 8th Basel title and the 36 year old is dead set on ending off the year as World No. 1.  Federer will face Paire’s fellow countryman Adrian Mannarino next.  Mannarino beat young Canadian player Denis Shapovalov 4-6, 6-1, 6-2.

It is the 15th time that Roger Federer has advanced to at least the quarter finals in Basel and was treated to a standing ovation by his home crowd. Federer seemed smitten, saying that it was always a pleasure playing at home, but that the pressure was on to perform during these times because of wanting to impress one’s own.  He said that it was important to him to try and stay in the tournament and keep on doing well.

Federer extended his FedEx ATP Head2Head series lead over Benoit Paire to 5-0.  The scoreline was similar to that of the Dubai Duty Free Tennis Championships earlier this year, when he also beat Paire by a margin of 6-3 or greater.

The Race Towards ATP

Argentine player and two times former champion Martin Del Potro also evidently meant business as he made his own way through to the final eight by beating Frenchman Julien Benneteau 6-4, 6-4.  The race is on for the two last available places at the ATP World Tour Finals in London and Del Potro is fast closing in as a late contender.

Del Potro will play Spain’s Roberto Bautista Agut next and the current tournament is very much where his focus is right now.  Speaking to the press Del Potro said that London was the last thing on his mind right now, and that he wanted to see how far he could go in the current tournament.  Once that was done, he would start to focus on the next one.