Federer A True Study At Beating The Odds 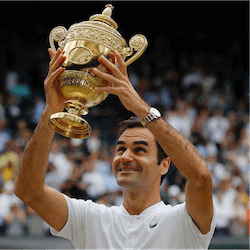 Roger Federer has done it again: having been ranked in 16th position a mere 6 months ago, with all 15 players above him having been his junior, he made his way through match after gruelling match – eventually walking away King of the Courts once more on July 16.  This is Federer’s 8th Wimbledon title, and 19th major victory.

Federer congratulated a very emotional match opponent Marin Cilic, saying that the competition could be cruel at times, but that Marin had fought well and was by all accounts, a true hero.  Referring to his defeat against Novak, Federer went on to say that he had not been sure that he would even make it to Wimbledon this year, but that he had kept on dreaming and kept on believing – and that making it was nothing short of a dream come true.  He also said that despite wanting to focus on his health, he was hoping to be back next year in order to defend the title.

Next Stop: The Big Two-Zero In New York

One may think that this is it – what, after all, follows Wimbledon?  The answer:  Grand Slam victory Number 20.  With main rivals Andy Murray and Novak Djokovic tending to injuries, Federer may round up his tally in the big apple yet.

With Federer rapidly approaching the big three-five and with a bad knee to boot, all odds were stacked up against him, and in a big way.  Having been defeated in his last three grand slam finals, Federer sought the advice of family, friends, trainers and his support team.  Did he still have it in him yet?  The answer was a unanimous: YES.

And a true prophecy it turned out to be:  Federer is now officially in the running to become the new oldest player to finish a year as No. 1 (thus replacing André Agassi).  With Murray effectively out of play for the moment, there is only one man who stands in the way of a new world record:  Rafael Nadal.

Much like Federer, Nadal has been holding fast to a new set of priorities: maintaining health, enjoying the journey and winning another Grand Slam.  Both players agreed that becoming enmeshed in a fight for the title of World No. 1 had been the farthest things from their respective minds up until this point.

That was true, at least until now.

Local wildcards are currently running the show at this year’s Australian Open, with Maddison Inglis continuing the streak on Tuesday as she sent US Open finalist Leylah Fernandez packing in a first-round topple at Melbourne Park. Inglis, who is 24 and from Perth, made quick work of wrapping up the ….

With the 2022 Australian Open now less than a week away, fans have been informed that crowds will be capped at 50 per cent capacity following a new surge in infections. Tickets already sold will be honored, confirmed a spokesperson for the Victorian government. Ground pass access will also remain ….

Aussie Nick Kyrgios seems to have made yet another difficult start to a year with his recent withdrawal from an ATP 250 tournament at Melbourne Park on Tuesday. Kyrgios, 26, has cited asthma as the reason for his withdrawal. Kyrgios is set to arrive in Sydney later this week – ….

Judy Murray, who is the mother of tennis stars Andy and Jamie, has reportedly won a harrowing eight-year-long planning battle to build a £40 million tennis and golf complex just outside of Dunblane. Murray said the complex will represent a legacy for her two sons. The complex was approved earlier ….