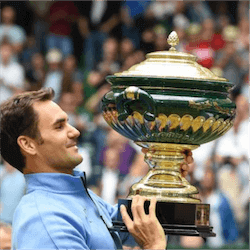 Tennis legend Roger Federer confirmed his status as one the all-time greats on Sunday, with an imperious win over 20-year-old Alexander ‘Sascha’ Zverev in the Halle Open final. The Swiss star dropped a mere nine points on his serve throughout the match and saved the only break point he faced. He needed just 53 minutes to beat the German 6-1, 6-3, claiming the championship for a record ninth time.

The Halle Open, played under sponsorship as the Gerry Weber Open, is held on outdoor grass courts in the north-west German town. As a result, Federer’s 92nd career title has only confirmed his favourite status in the men’s singles tournament at Wimbledon, which began its qualifying rounds this week. Federer is now being offered at between 9/4 and 2/1, to win his eighth Wimbledon title and his 19th career Grand Slam.

Federer faces some stiff competition at Wimbledon. Despite crashing out of the Queen’s Club Championships, another popular grass-court prep tournament for Wimbledon, in Round 1, World No. 1 Andy Murray is still second favourite for The Championships, at between 7/2 and 3/1.

Murray’s the defending champion, and he also won Wimbedon in 2013. But Federer has won 14 of their 25 encounters, with a 2-1 lead on grass. Croatian Marin Cilic, who finished as runner-up at Queen’s Club, should also be considered for Wimbledon. The 2014 US Open winner is currently at between 23/1 and 14/1 in the betting.

Feliciano Lopez, the Spanish 35-year-old who beat Cilic in the Queen’s Club final, also beat Grigor Dimitrov, Tomas Berdych and Swiss World No. 3 Stan Wawrinka. All except Berdych are currently higher than Lopez in the Wimbledon betting, but at 66/1 to 100/1, the Spaniard may be worth a punt.

The rivalry most tennis betting fans are most hoping to see continued at Wimbledon, however, is that between Federer and Rafael Nadal. The two have been battling each other on the courts since 2004, and although Nadal is clearly ahead with a win record of 23-14, his massive 13-2 dominance on clay skews that figure.

On grass, Federer is actually ahead with two wins to one, and Nadal has only two Wimbledon titles, as opposed to the Fed’s eight. Nevertheless, after their gruelling, close final at the Australian Open, and Nadal confirming his King of Clay status with his 10th French Open title earlier in June, the Spaniard can never be ruled out. He’s currently third favourite at Wimbledon, at between 5/1 and 4/1.