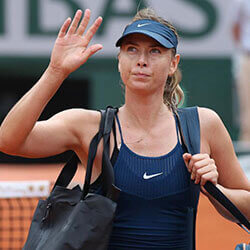 Former French Open winner Maria Sharapova has officially withdrawn from the tournament this year following a shoulder injury that the player has been battling with for some time. The 32 year old, who is currently 35th in the world, has not played any competitive match since she pulled out of an event that took place in her native home of Russia at the beginning of the year, after which she underwent a minor operation in an attempt to correct the problem with her shoulder.

Talking about her pulling out, Sharapova sated that sometimes the right decisions are not always the easiest ones. The French Open this year begins at the end of May will run until mid June. Sharapova, who claimed the title in both 2012 and 2014, returned to the tour in 2017 after she was given a 15-month ban for taking the banned drug, meldonium.

She had reached the French Open quarter final games during last year’s event, but ultimately lost to third seeded Garbine Muguruza 6-2 6-1. For the opening Grand Slam of this year, the Russian once again lost to Australian Ashleigh Barty for the 16th round. Taking to her social media accounts, Sharapova had stated that in better news, she had begin to practice I the courts again, and that she was slowly building the strength and stamina back into her injured shoulder. She added the post alongside a picture of her with her trophy from 2014.