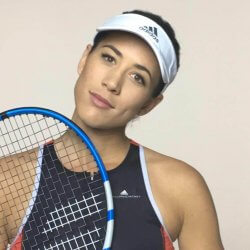 Garbine Muguruza has successfully defended her title at the Monterrey Open after Victory Azarenka was forced to leave the game due to a leg injury. Azarenka, former world number one, who was playing her first singles final in three years, called for a medical timeout after she lost her first set, and asked for strapping to be applied to her right calf.

The 29 year old Belarusian continued the game, but was obviously retired before she called to withdraw as she was trailing 6-1 3-1. Talking about her win, 25 year old Muguruza stated she was very happy with the week, and that it was a great feeling to be able to defend a title.

This is also marked as the two time Grand Slam winner’s first title since she won in Mexico in 2018. Azarenka last competed in a singles game final in April of 2016, where she won both the Indian Wells and the Miami within two weeks, before she announced her pregnancy later in the year, and giving birth to her son in December.

She returned to the sport on a competitive level the next summer, but has since been involved in a lengthy custody battle with her son’s father, which has severely impacted her ability to play. Talking about the game, Azarenka stated that it was unfortunate that she was unable to giver her best, although she had tried her hardest, and that she wanted to thank her son Leo