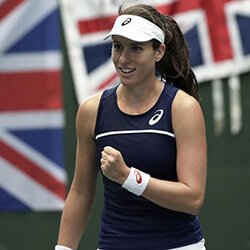 Great Britain has brought an end to their 26 year wait for promotion in the Fed Cup after Katie Boulter claimed a 3-1 over Kazakhstan and saw the team celebrating their promotion. The squad ran on to the court and began to hug Boulter after she beat Zarina Diyas 6-7 (1-7) 6-4 6-1. Boulter, who is currently the British number two, was trailing by a set and a break, and asked for a hot water bottle during the changeover, but was relentless on the court.

Earlier, Johanna Konta had pushed Britain to just one win away from entering the World Group II ranks. Konta’s comeback from 4-1 down during the final seat to best Yulia Putintseva 4-6 6-2 7-5 has given those at home the hope that Britain would finally be able to gain the much sought after promotion n what was their fifth play off in the last eight years. It seemed, however, that they would have to carry on waiting when Boulter lost her nerve during the match, despite having won the opening two rounds.

Ultimately she prevailed thanks to a brilliant ace on match point, and the celebrations were quick to follow. Britain captain Anna Keothavong, whose team was parading around the court, told reporters after the match that she was ecstatic for her team, adding that it was an incredible effort, and that having the home advantage made all the difference to ending the losing streak.