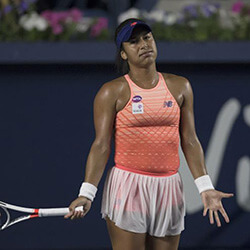 British Heather Watson was not able to earn her first WTA Tour main draw victory since September after losing to Russian teenager Anastasia Potapova during the Hungarian Open. 26 year old Watson lost 6-4 2-6 7-6 (7-4) against the 17 year old while playing in Budapest.

Watson, who has since dropped to the rank of 111th in the world, was leading the final set 5-4 before Potapova won the next three games. The British player broke server and forced a tiebreak, but Potapova, ranked 87th, quickly took control of the match. Potapova, who has previously reached the finals in two of her seven main draw tournaments that she’s participated in, took the victory with an ace on her first match point, and pushing Watson further from the win.Watson grew visibly frustrated during the later stages of the two hour match, often throwing her racquet against the ground and sitting in her chair with her head in her hands for one changeover as her chances at a first main draw win since the Quebec semi finals slowly ebbed away.

It marks her first appearance since she missed Great Britain’s Fed Cup matches earlier in the year due to illness. Her only wins so far this year have been through qualifying at the Hobart Open, but she also won matches in Challenger and ITF Tour events toward the end of last year, the tiers leading up to the main WTA tour.