Jamie Murray And Bruno Soares Advance To Second Round 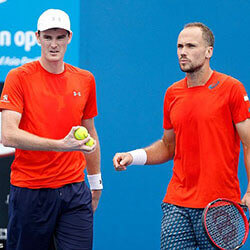 Former Australian Open victors Bruno Soares and Jamie Murray have advanced to the second round in Melbourne after beating Andres Meltini and Roman Jebavy for the tournament’s men’s doubles.

Brazilian Soares and British Murray, who are both winners from 2016, earned the massive tie-break during the second set to beat the Argentinian and Czech players 6-4 7-6 (13-11). The third seeded places are now set to take on all British pair Luke Bambridge and Jonny O’Mara in for the second round. Along with them was American Taylor Fritz and Cameron Norrie, who have also advanced to the next stage of the tournament. Norrie beat Fritz in a singles game earlier in the Australian Open, and have since been paired up to take on the doubles, showing tremendous skill together.

They beat Damir Dzumhur and Mirza Basic 7-6 (9-7) 7-5 and are getting ready to face Jack Sock and Jackson Withrow. Americans Withrow and Sock shocked second seeded and 2018 runner-up players Robert Farah and Juan Sebastian Caban from Colombia 6-7 (6-8) 6-3 and 6-4.

British Ken and Neal Skupski have also moved forward after beating Australian duo Jordan Thompson and James Duckworth 6-3 6-4. They will be playing against Australian John Peers and Finnish Henri Kontinen for the second round. Britain’s Joe Salisbury has also made it through alongside American Rajeev Ram after they won their match against Chilean Hans Podtipnik Castillo and Argentine Guideo Pella 6-0 6-4.