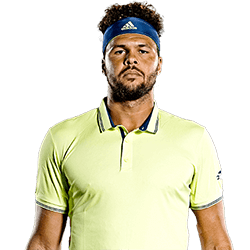 French Davis Cup coach Loie Courteau has allayed fears that Jo-Wilfried Tsonga will be forced to miss the final game at the Davis Cup due to a shoulder injury that forced the 33-year-old to cut his training earlier than usual.

Tsonga, who was the former world No.5 was seen with strapping on his shoulder after the training session, with took place just ahead of his upcoming match set to take place against Croatia in Lille.

Coach Courteau has told reporters that he does not believe the injury is serious and should not keep the fan favourite from taking part at the Stade Pierre-Mauroy. He added that Jo is doing well, and that he had felt a little numbness in his shoulder and they decided to end the session earlier to avoid taking any risks.

Courteau went on to explain that their aim is to not take any risks ahead of the final game for the Davis Cup, and that the most important thing for the player is that he was given the chance to complete a full week of training. He added finally that no plans had changed in regards to the upcoming game even though he only trained for a total of an hour.

The French team are hoping to retain the title that they earned in the same Stadium last year against Belgium. They have also named a strong team that includes Lucas Pouille and Jeremy Chardy.