Johanna Konta and Katie Boulter Give Britain The Win 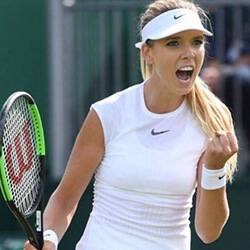 Johanna Konta secured a victory of Great Britain over Slovenia for the first home place Fed Cup tie in 26 years. British world number 39 managed to save three set points in a first set tie break before she eventually beat Dalila Jakupovic 7-6 (9-7) 6-2 while playing in Bath.

Prior to this, Katie Boulter had given her home country a strong start after beating Kaja Juvan 6-4 6-2. It meant that Great Britain had the lead before Katie Swan and Harriet Dart won the doubles for a 3-0 victory. Great Britain are currently bidding to make it to the World Group II play offs for a third consecutive year in a row, will be facing Greece in their upcoming Group A match.

There are currently eight teams that are taking part in the Europe/African round robin event which is being held in Bath, with the eight teams being split into two groups. Only one side will be given the chance to progress to the play off event later this year in April, which will allow them to fight for promotion to the next tier.

With the absence of Heather Watson, who is currently ill and was ultimately forced to withdraw from the event, Dart and Bristol teenager Swan made their debut and entertained the West Country audience with a 6-2 6-2 victory over Juvan and Jakupovic. They were given further support throughout the evening, despite the event finishing late into the night.