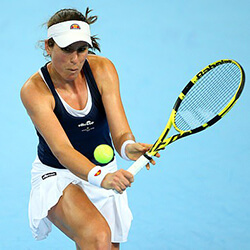 Johanna Konta held off an aggressive assault from Romanian Ana Bogdan to claim a place in the last eight of the Morocco Open semi finals. Konta looked as through she would be in for an easy victory as she sailed through the opening set, and was 4-1 ahead of her opponent during the second, only for Bogdan to suddenly fought back and level the match by winning a second set tie break.

Despite this, Konta, who is seventh seeded, regained her composure for the third and final set and sealed her victory with 6-1 6-7 (6-8) 6-2 and advanced to her only quarter final of the season so far. Konta made a brilliant start with a break of serve early into the opening game, and then another two gave her the set in under half an hour. She made another break in the second set gave the British number one lead, but Bogdan would quickly find her rhythm from the back of the court, and went on to break her British opponent and took the lead 6-5.

Bogdan, who is 132nd in the world proved unable to serve out for the remainder of the set, and Konta claimed a match point at 6-5 with two serves still to come, but went on to lose the next three points in a row. The last set saw Konta regroup and fight back against Bogdan, breaking her in consecutive service games, and finishing off in an hour and 59 minutes.