Johanna Konta Moves to Second Round of French Open 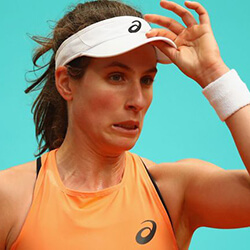 British number one Johanna Konta has advanced to the second round of the French open for the first time in her career, and said that she couldn’t stop herself from overthinking throughout her entire match. Konta, who is 26th seeded, won her game against German world number 47 Antonia Lottner 6-4 6-4. Konta had lost her four previous first round games while playing at Roland Garros.

Talking about her latest win, she stated that it was nice to have won a main draw match, but that she had never doubted her ability to play on the surface. Konta claimed her first match point when Lottner was not able to return a backhand, which set up a second round match against American Lauren Davis.

The former semi finalist of Wimbledon is the first British player through at Ronald Garros, with men’s number one Kyle Edmund ready to take on Jeremy Chardy in his next game. Cameron Norrie and Dan Evans are also set to play their first matches soon.

Konta, who had won her qualifying matches at Roland Garros both in 2013 and 214, stated that her barren main draw match had not been playing on her mind. Despite this, it was undoubtedly clear that beating Lottner, who is ranked 121 places below Konta, was an important obstacle to get past for the player. Continuing with her statement, Konta said that it’s human nature to have negative thoughts, and that it was about her trusting her habits.