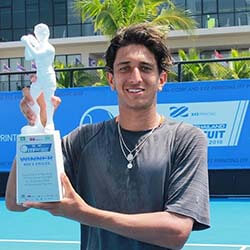 A top New Zealand Davis Cup tennis player has issued an apology after he was filmed supposedly mocking Mãori culture while at a party on a $21 million dollar boat owned by toy giant Zuru founder Nick Mowbray on Wednesday night.

Ajeet Rai, 22, will reportedly be sanctioned by Tennis New Zealand after videos showing him and several other partygoers performing the pukana while using a stick as a taiaha was posted to social media by Belgian DJ Netsky. Both Rai and Netsky have since apologised for the video. The video has now been removed.

The video appeared to have been filmed as part of New Zealand’s America’s Cup victory on Wednesday, but since Rai was performing neither a haka nor a waiata in the video, there had been no explanation as to why he would have been performing the pukana.

Rai in an Instagram post on Friday apologised to anyone who might have been hurt by his actions, saying that as a representative of New Zealand, he had always been nothing but proud to perform the haka and to also show the rest of the world the beauty of the country’s indigenous culture.

Tennis New Zealand shortly after the incident posted a social media entry of its own to Instagram, saying that the organisation was disappointed at the behaviour displayed by Rai in the video, and that the appropriate sanctions would be applied.

The organisation first became aware of the video after it had been sent in the form of a link to Tennis NZ by Shaneel Lal, who is the co-founder of End Conversion Therapy NZ.