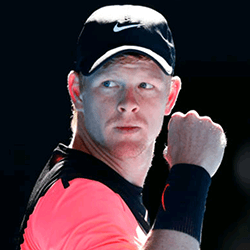 British Kyle Edmund was forced to exit the US Open during the first round after a loss against Italy’s Paolo Lorenzi. Lorenzi, who is currently at world ranking 94, beat the 16th seed 4-6, 6-4, 7-5, and 6-1. The game was played at Flushing Meadows on a day with extremely high humidity.

Edmund, 23, started off strong, taking the opening set, and then began losing ground quickly in the second set, eventually cramping up in the third, which affected his movements on the court.

Edmund’s compatriot, Cameron Norrie, saw far more success after he beat Australian Jordan Thompson 7-5, 4-6, 6-4. 6-3. Norrie broke through his opponent’s defences six times, emulating his feat from 2017, where he reached the second round of the grand slam for the first time in his career. He is now set to face Serbian Dusan Lajovic.

Edmund told reporters that he was not at his full fitness before entering the first round. The Briton, who pulled out of the Croatia Open in Umag, has been suffering with tonsillitis, as well as a viral illness after he played at the Australian Open and Wimbledon.

He explained that he was not physically up to the challenge, and although he wanted to give it his all, he just wasn’t good enough. He added that he’s been battling since Wimbledon, and that he’s been working hard on improving his physical condition and health as he moved into this year’s US Open.