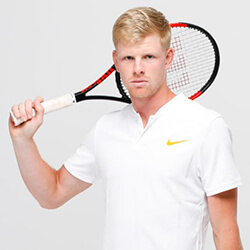 British number one Kyle Edmund lost an early lead after being beaten by Diego Schwartzman during the first round of the Monte Carlo Masters. Edmund, who is currently number 23 in the world, led the game against Argentinian Schwartzman by a set and 3-0, but he eventually lost 4-6 6-3 6-1.

The 24 year old has won only one of the final 123 games he’s played against Schwartzman, who is now just one rank below him in the world leaderboards. Schwartzman is set to face either Taylor Fritz or Jo-Wilfried Tsonga next.

There were a total of five serve breaks in the difficult opening before Edmund was able to successfully convert his first set point. The British player continued to break Schwartzman at every opportunity he could get for the second set, but the Argentinian won nine straight games in a row to eventually level the match, and had the lead early into the third set. Edmund held the serve for 1-3 and claimed a break point for the next game, but a failed backhand volley saw Schwartzman take on the lead.

The Argentinian, whose last success saw him reach the French Open quarterfinals last year, continued his assault to serve out victory. The two will be facing each other again during the men’s doubles. Neil Skupski and Edmund will be teaming up to take on Joao Sousa of Portugal and Schwartzman, while Cameron Norrie will be opening his singles campaign during the same day.