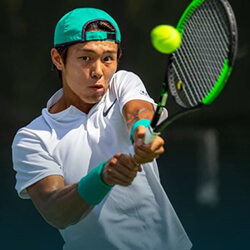 Lee Duck-hee from South Korea has become the first deaf player to win a game in the main draw of an ATP Tour event. At the Winston-Salem Open in North Carolina, the 21-year-old, ranked 212th in the world, beat Switzerland’s Henri Laaksonen 7-6 6-1.

Talking about both his win and his disability, Duck-hee told reporters that people tend to make fun of him, and tell him that he shouldn’t be practicing. He added that he wanted to show everyone that he could do this, and that his advice to other disabled players is to not be discouraged. He continued, saying that if you try hard enough, it’s possible to do anything. Lee interacts mostly with lip reading instead of sign language. His fiancée Soopin helped him during his post-match interview, clarifying journalists’ responses in English.

Britain’s Andy Murray has come out in support of Lee, stating that it must be difficult to perform without being able to pick up on the velocity of the ball. by listening to the noise. The 32 year old, who won in North Carolina’s first round as part of his transition to singles after an injury said that it was an enormous drawback, and that what the deaf player is doing is a massive undertaking. Lee, who in his next round faces third seed Hubert Hurkacz, performed his first ATP Challenger Tour tournament while only at the age of 14 years old.