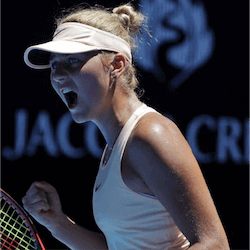 This year’s Australian Open certainly has made a comeback from the initial disappointment of a number of the big names having withdrawn from the event just days before the tournament was set to start.  In fact, it’s turned into an exciting affair marked by a number of surprises.

Ukrainian qualifier Marta Kostyuk has become the first 15 year old player to have reached Round 3 of the event since 2005.  This after she beat Olivia Rogowska in straight sets.  This also means that Kostyuk is now as of yet undefeated in Melbourne, having won the Junior Australian Open last year.

Kostyuk reports having felt unwell on the court during play due to the severe heat that she experienced on Margaret Court Arena.

The last player to have reached the third round of the tournament at such a young age was Czech player Nicole Vaidisova.

Federer: Why The Greats Are Greats

Meanwhile, Roger Federer has ventured an assessment as to exactly why players like Rafael Nadal and Novak Djokovic manage to reach the levels of success that they do and keep coming back for more.  Federer’s conclusion: resilience.

Federer has said that he thinks that the elite players are those who bounce back by sheer determination and who keep on doing so.  According to the Swede, these are the players who keep on achieving ongoing success.

Federer made it look like child’s play when he made his way into Round 2 of the Australian Open on Tuesday by beating Aljaz Bedene 6-3, 6-4, 6-3.  Federer is hoping to successfully defend his 2017 Australian Open title that he fought so hard to win after having been away from the game for six months due to back and knee injuries.

This year it’s an altogether different story and in many ways the tables have been turned.  Federer is in top-notch condition and fit and a fiddle, but the same cannot be said for Nadal and Djokovic.  Both have entered this year’s tournament after having voiced concerns regarding their own levels of fitness and bemoaning how recent injuries have kept them away from competitive match practice.

Nadal and Djokovic both got off to a solid start in this year’s tournament.  Nadal beat Victor Estrella Burgos in just three games, acing the top half of the draw.  Djokovic, in turn, beat Donald Young 6-1, 6-2, 6-4.

It certainly is early on in the tournament yet, but it appears as if their time away from the court has not stood in the way of their having made a smashing return.