Mertens And Wozniacki To AO Quarterfinals 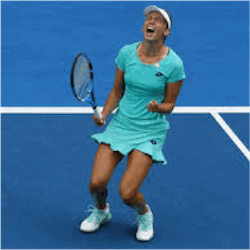 Elise Mertens has become the first Belgian to reach the quarterfinals of the Australian Open since Kim Clijsters managed the same feat back in 2012, after Sunday’s straight sets victory over Petra Martic.  The game was eventually won after almost two hours of racing down baselines on Margaret Court Arena.

Mertens is in superb form and is making her main draw debut at this year’s Australian Open.  She is currently on a nine-match winning streak after having made a successful title defence in Hobart just a little more than a week ago.

Mertens has had a fantastic start to the year and could possibly end up facing Elina Svitolina next.  Svitolina won the Brisbane International warm-up.  Mertens is breaking new ground at this year’s Australian Open; she has only once before managed to progress past the opening round in a major Grand Slam event, at last year’s Roland Garros, when she made it through to the third round.

Wozniacki Has Nothing To Lose

Caroline Wozniacki has said that she has nothing to lose at this year’s Australian Open, having previously been down 5-1, and that for her it was now simply a matter of keeping going.  She has since won both her matches and will face Carla Suarez Navarro next.  Navarro recently beat no. 32 Anett Kontaveit 4-6, 6-4, 8-6.

It was a very tight tiff against 2017 Wimbledon finalist Magdalena Rybarikova on Sunday.     Wozniacki ended up dominating the fourth-round match after having gotten off to a nail-biting start.  Her having attempted a tweener (a between-the-legs shot) is an obvious reflection on her new-found confidence.  Wozniacki could very well make a return to the top rankings if she manages to reach this year’s Australian Open semi-finals.

Heading on over the men’s division, Nick Kyrgios has finally opened up about having been booed off the courts this time last year after having been accused by fans of giving up when he crashed out during the second round of a tumultuous five-set defeat at the hands of Andreas Seppi from Italy.

Kyrgios remains exciting and ever so slightly unpredictable but seems to have taken a turn for the better.  He lost against world no. 3 Grigor Dimitrov on Sunday after having gone at it hard and fast in four intense sets.

Kyrgios has said that he isn’t unhappy with the results that he had managed to achieve at this year’s Australian Open and that by all counts, he had gone down swinging.