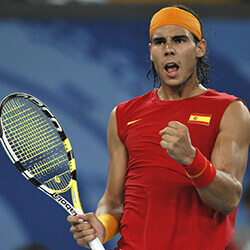 Rafael Nadal, considered the best tennis player in the world right now, has been berated by supporters after he was seen in the Wanda Metropolitano during the Diego Simeone’s game.

The controversy was started because he was caught on camera wearing an Atletico scarf around his neck.

Reporters attempted to find out the truth before the start of the Madrid Open. Nadal insisted that the reason for his wearing the scarf was due to the colder weather. He stated to reporters, “Well, there is a problem with today’s society, that to be a true supporter of one team, it seems to have to be anti another team.”

He continued by saying, “I just support Real Madrid. I have a lot of friends that are from Atletico. They are playing in a competition in Europe against an English team. I just went there to support Atletico Madrid. They invited me. I just wanted to enjoy the day, to see a great football match.”

Despite his support for Zinedine Zidane’s men, Nadal’s uncle Miguel Angel once played for Barcelona a few years back, which is part of the reason for the controversy.

Nadal is set to play later on at Real Madrid as he attempts to both defend his title while winning the tournament for the sixth time in his career.