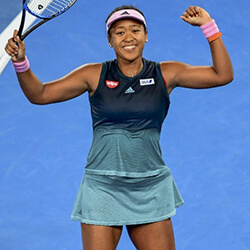 Japanese Naomi Osaka has beaten Czech Petra Kvitova during the 2019 Australian Open to win a back-to-back Grand Slam title and has become the world’s new number one.

The US Open winner, 21, started to cry after missing three of her championship points during the second set, but managed to pull clear with 7-6 (7-2) 5-7 6-4. The fourth seeded broke 2-1 in the decider, but eventually served out the win. Kvitova, who is eighth seeded, was hoping for her first major title after recovering from a knife attack.

Osaka was thrilled during the trophy representation that took place in Melbourne, far different from her US Open victory, and she continued her tradition of awkward acceptance speeches.

Kvitova, a two-time Wimbledon winner, who has previously said that she’s lucky to be alive after her stabbing incident, which took place in December of 2016, proved a worthy opponent and took the match into a third set as momentum swung back and forth.

Osaka’s win seemed inevitable before Kvitova regrouped for 5-5 in the second, and then went on to win 12 points successively to lead for the first time since the start of the match. After welling up in the second set while leaving the court for a break, Osaka regained her focus and took on a decisive advantage over her opponent. She has now become the first player since Jennifer Capriati to follow her first Grand Slam with another soon after.