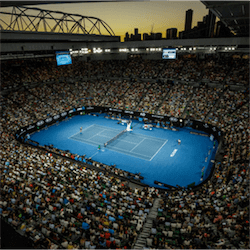 Nadal And Federer To Resume Rivalry At Australian Open

Rafael Nadal and Roger Federer will resume their rivalry come January 15th when the 2018 Australian Open commences.  Nadal and Federer are tennis’ top two seeds and occupy 1st and 2nd positions on the world rankings list.  Federer currently holds the Australian Open title and many believe that he is well able to defend that title in January, despite having been beat to the number 1 slot on the rankings by Nadal.

French Open finalist Robin Soderling has pointed out that when Federer was at this best last year, no other player was able to even match it, let along beat it.  And that includes Rafael Nadal.  In addition to a performance that was nothing short of sterling throughout last year, it is widely assumed that Federer would have been at the top of the list had he played the clay season and that it was very much a case of his being absent that benefited Nadal to the point of rising above and beyond.

One must surmise at the choice of a front cover for game developer Big Ant’s Australian Open PS4 and XBox 360 game.  Australian Open Tennis will launch in Australia and New Zealand on January 16th, with the front cover displaying players Rafael Nadal and Angelique Kerber.  5-times Australian Open winner Roger Federer is blissfully and strangely absent.  Adversely, Nadal has won the Australian Open once only, making the decision to show Nadal and not Federer, even stranger still.

One must wonder if Roger Federer, and many others for that matter, would agree with Symons.

More To Australian Open Than Nadal And Federer

When talking Australian Open let’s not forget about Andy Murray and Novak Djokovic.  Federer and Nadal may be 1 and 2 for good reason, but Murray and Djokovic may cause a few upsets yet.  Andy Murray is bound to have his sights set on a firm comeback after having been out of the game for six months due to a hip injury.