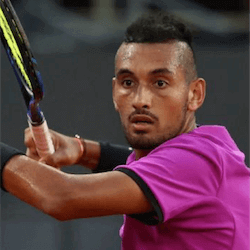 Nick Kyrgios is either very confident, or the victim of an extended silly season.  He is currently training hard to get fit ahead of next month’s Australian Open, but has said that he sees no need to hire the services of a full-time coach.  The 22 year old pro-tennis star recently told reporters that despite his having worked on a part-time basis with French coach Sebastian Grosjean on and off during the year, he has yet to find a permanent coach who has his (Kyrgios’) best interests at heart.

Looking ahead to 2018, Kyrgios said that he would most probably continue to do things as he had up until now.  Without a coach.  Or until the right one comes along, in anyway.  He went on to say that he had been going it alone for the last three years and had managed to get to a career high of 13 on his own.  There really was no need to be handing out cash to someone who might only be in it for the money instead of for tennis’ sake.

Kyrgios also said that he wasn’t looking for a hot shot coach with a big name in the world of pro-tennis, but instead needed someone that he could confide in and who wanted what was best for him.

Lack Of Support Not The Best Of Ideas

If truth be told, Kyrgios may want to re-evaluate his lack of a more permanent support team.  He has recently slipped all the way down from 13 to 21 as a result of a season that was plagued by injury problems, specifically his hip.

He has also been experiencing problems with his knee as a result of an injury sustained while playing basketball, his other passion.  He cited this as the reason for prematurely dropping out of the 2017 tournament.  He said that he realised that playing the volume of basketball that he had been doing in the run-up to the tournament wasn’t ideal for his body, especially not coupled with the physical demands of tennis.

Despite the year’s woes, Kyrgios has said that he was slowly getting to where he needed to be in terms of the Australian Open and that he would be playing Tie Break Tens with Novak Djokovic in further preparation for the tournament.

He has also said that he expects to do well at this year’s Open and certainly better than last year, when he had gone into the event with a lot of hiccups.