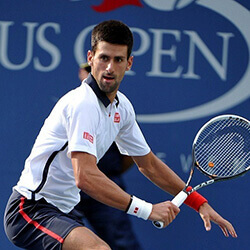 Famous player Novak Djovokic has set his eyes on a third title win at the IS Open this year, which is being played in Flushing Meadows, New York City. The player will be joining up to finish off the sport’s “big four” who haven’t been seen together since the 2017 Wimbledon games.

Djokovic, who was the first person in history to win al nine Masters titles, as well as his latest victory over Roger Federer in Cincinnati, claimed a win at Wimbledon in July, and is currently on the same level as world number 1 Rafael Nadal. The two are primed to fight it out in Flushing Meadows, and have equal chances to earning the title.

This year’s US Open will be his first since 2015, after having to miss last year’s event due to an elbow injury. His slow recovery saw him struggle at Roland Garros in June, but three months later that Serbian player is now one of the biggest contenders at the US Open.

Djokovic has told reporters that he’s thrilled to be back, especially after the months he battled with his injury. His last victory at Wimbledon saw the player’s Grand Slam title collection rise to 12, just behind legendary Pete Sampras. Djokovic also boasts 31 Masters, which is four more than Federer but two less than Nadal.

The big four will be starting their respective campaigns at the end of August, with Djokovic leading Nadal 27-25, Federer 24-22, and Murray 25-11.