Novak Djokovic Fights On In US Open 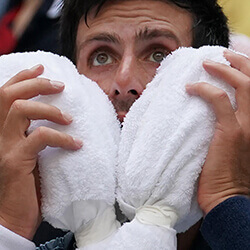 Wimbledon champion Novak Djokovic fought through high US Open temperatures to take on Hungarian Marton Fucsovics in the second round, winning with a 6-3, 3-6, 6-4, 6-06 victory.

Djokovic is playing his first game in the Arthur Ashe Stadium since he lost to Stan Warwinka during the 2016 final. The Serbian player faced harsh temperatures and high humidity in Flushing Meadows, prompting organisers to allow the players a 10 minute mid-match break for the first time in the event’s history.

Djokovic told reporters after that both him and Fucsovics were struggling, and that they weren’t the only ones suffering in the brutal temperatures. During the break, Djokovic called for his trainers to bring him ice packs late in the second set to help him cool down.

Despite a rocky start to his campaign this season thanks to his previous elbow surgery, Djokovic pulled through, eventually earning his 13th Grand Slam title at Wimbledon. Once again at the Cincinnati Masters, Djokovic saw victory after besting Roger Federer, and earned the title of US Open favourite alongside defending champion Rafael Nadal, despite Djokovic’s sixth seeding.

His skill showed in the ten games that he played against Fucsovics before the heat break was called between the third and fourth sets.

Federer, who is second seeded, managed to avoid the heat thanks to a night game he played against Japan’s Yoshihito Nishioka that ended in a 6-2, 6-2. 6-4 victory for the 20 Grand Slam title winner.