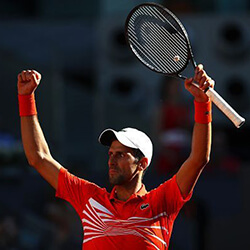 World number one Novak Djokovic claimed victory against Stefanos Tsitsipas to won the Madrid Open final for the third time in his career. The 31 year old Serbian player previously bested Rafael Nadal’s semi final 6-3 6-4 in an hour and 32 minutes, and earned a record 33rd Masters 1000th title. Djokovic entered the lead with 3-0 for the opening set after he broke the 20-year-old Greek for the second game.

And he broke again in the ninth game during the second set, ensuring that he didn’t drop a set for the entire tournament. Djokiovic’s newest tour title, which is his 74th, came after he made one quarter final in his last three tournaments since winning at the Australian Open for the seventh time. Talking about his latest victory, Djokovic said that it was an important win for him, especially for his confidence, and that he wasn’t playing his best game after the Australian Open so he was looking to regain some of his lost momentum.

Tsitsipas, who saw victory over Roger Federer at the Australian Open, has had a successful season so far, and along with his win against Nadal, has also won his previous match against Djokovic while playing at the Rogers Cup in Toronto. But he ultimately struggled against the 15-time Grand Slam champion – who seemingly had much more energy on the court – after he overcame Austrian Dominic Thiem in the semi finals earlier in the tournament.