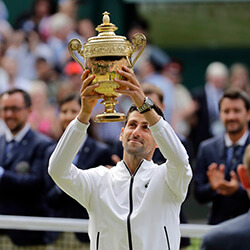 Novak Djokovic managed to save two championship points in Wimbledon’s longest singles final to hold on to his defending title in an exciting win against Roger Federer. Played on a Centre Court with an atmosphere that overflowing with energy, Djokovic won the game 7-6 (7-5) 1-6 7-6 (7-4) 4-6 13-12 (7-3).

The game lasted for four hours and 57 minutes, with Federer making his biggest mistake right at the end, sending the ball to high and handing the win over to the Serb played. The world number one has claimed a total of 16 Grand Slams in his career, with four coming from his last five court sessions.

Talking about his victory, Djokovic told reporters that it felt unreal after he claimed his fifth Wimbledon title. Federer added that it had been a great match that had everything, and then congratulated his opponent. The final between the two, which had been highly anticipate for some months, always had the potential to turn into one of the greats for the international event.

Federer had two championship points with 8-7, while Djokovic maintained his nerve and saved both and then broke back, and eventually took the match to a tiebreak with 12-12. Federer had been hoping to become the oldest Grand Slam winner for the Open era, but was instead part of a new record after their match surpassed the previous longest running game, which he was part of in 2008 when playing against Rafael Nadal.