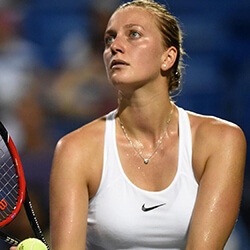 Two time Wimbledon winner Petra Kvitova may not compete in this year’s event after she withdraw from a warm up game in Birmingham with an arm injury. The 29 year old, who is currently fifth in the world, and who took the singles title in both 2011 and 2014, pulled out of the first round of the French Open last month because of the injury.

Taking to social media, Kvitova wrote that Birmingham was too soon for her, and that she’s worked really hard to get back as soon as she can and is hoping to participate in Wimbledon this year. The player beat British number one Johanna Konta as part of a successful defence during Birmingham’s Nature Valley Classic title that took place last year. Her 2017 win at the event was also her first title since she had been attacked and stabbed at her home the previous December.

Adding to her statement, she said that she has the best memories of Birmingham, and that it was the firs place she won her title after she came back from her injury and that she always has the best time there and hopes to play again next year. Fellow Czech player Karolina Pliskova will, however, remain in the draw from Wimbledon.

The world number three will be joining US and Australian Open winner Naomi Osaka along with Ashleigh Barty, who won the recent French Open, making this year’s event the first of its kind.