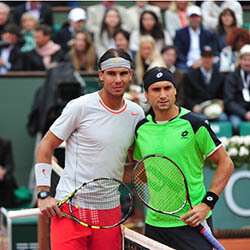 Rafael Nadal, the current top seeded player and 11 time Barcelona winner has advanced to the quarter final of the event for the 13th time after beating compatriot David Ferrer 6-3 6-3 in an hour and 56 minutes, making it his 60th win of all time at the Trofeo Conde de Godo. Nadal showed more skill when he played against Leonardo Mayer for his last match, where he saved four out of five break points as he continued to add pressure on David who has played his last match in Barcelona.

It also marks the 32nd encounter between the two players, as well as the 26th win for Nadal, and is now preparing to take on either Jan-Lennard Struff or Stefanos Tsitispas, the latter of which he beat over a year ago during the final. The rain caused several interruptions over the course of the match, and the two players were struggling to keep a rhythm going in the cold, wet weather. With Nadal’s win, it’s most likely the last game that the two will ever have together, ending a long rivalry that started in Stuttgart 15 years ago.

Nadal had saved two break points for the opening game of the match, hoping to avoid any early setbacks, and went on to a break at 3-2 when David had sent a backhand too long, which wrapped up the opening match a forehand down. Nadal came back and broke again at in the second, and continued to serve well throughout.