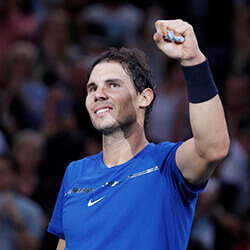 Nadal’s winning stream continues as he makes it into the quarterfinals of the French Open. His latest win saw him earn 6-3, 6-2, 7-6 against Germany’s Maximilian Marterer, which pushed Nadal over into the quarterfinals. The win also allowed Nadal to earn a new score for the Open, beating Jimmy Connors on the all-time list of match victories at major games. Nadal currently sits at 234, just one above Connor’s 233.

The only other two players in the world above Nadal are Novak Djokovic, at 244, and Roger Federer, who is currently at 322.

It’s been an incredibly strong season for Nadal, and his campaign to move up the scoreboard has left him with some other achievements that he has seemingly not noticed. One, for example, is his 900th career win that he earned after beating Marterer.

Nadal has told reporters that while he doesn’t feel old, he will soon be turning 32, and that he has been part of professional tennis for a long time, having started very young. He continues by saying that he’s been enjoying the season so far, and hopes to continue his winning streak as the event pushes onward.

The next opponent that Nadal will be facing is Argentinian Diego Schwartzmann, and the quarterfinal match against Nadal will be the Argentinian’s first time at Roland Garros. Right now, Nadal’s biggest competitor is Djokovic, who is the only other player in the world who has earned as many achievements as Nadal.