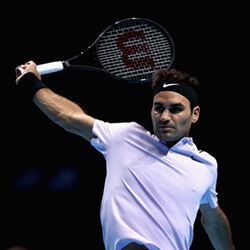 Six-time ATP champion Roger Federer has beaten Kevin Anderson 6-4 6-3 and secured his spot in the semi-finals at the ATP Finals for the 15th time in his career.

Federer’s latest win against Anderson means that he will now be joining the group set to take part in the semi-finals in London, which also consists of world number one Novak Djokovic. The 37-year-old Swiss player initially seemed to be battling during his first match of the event, but he quickly returned to form with two successive wins.

South African Anderson had won two matches previously, securing his place at the semi-finals. Djokovic, who is currently the top seeded player, earned his top group spot in the semi-finals after beating Marin Cilic in a straightforward and seemingly easy game for the Serbian player. Alexander Zverev, Cilic, and John Isner are now set to fight it out amongst each other for a spot in the upcoming semi-finals.

Although there were some questions raised over Federer’s form and state of mind after losing to Kei Nishikori in straight sets in his first game, he quickly recovered after besting Dominic Thiem. Federer knew that he needed to win six games to have a chance to facing Wimbledon finalist Anderson in the semi-finals. Federer’s seemingly miraculous recoveries have become a staple of his play style.