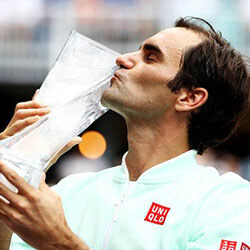 Swiss Roger Federer has claimed his fourth Miami Open win thanks to a 6-1 6-4 victory over defending champions John Isner. The 37-year-old world number five started the game in good form, and took the first set within 24 minutes. It was also his 50th Masters final, and the fourth seeded Swiss put on his usual outstanding groundstrokes and took Isner in an hour and three minutes.

It’s marked as his 28th Masters title, as well as his 101st overall title for a player that has won a total of 20 Grand Slam singles titles. Talking about his victory, Federer stated that it had been a busy week for him, and that he was so happy to have won after first playing in 1999 and again ten years later. Federer struck 17 winners throughout the game, which included six off his well-executed backhands.

Following his latest win at the Dubai Championships, Federer became the first two time champion this season for the ATP Tour, and ended a steak of 19 winners throughout the year so far. Isner came into the meeting against Federer in Miami having not dropped a single set throughout the event, and won nine of the 10 sets for his tiebreak. Federer had beaten Isner four times in their previous five matches, and was quick to start asserting his dominance, losing only a single point during the opening set while Isner struggled to remain composed.