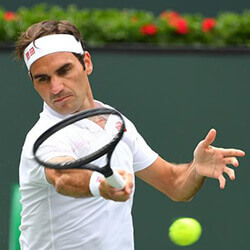 Roger Federer has beaten British number one Kyle Edmund, and has advanced to the quarter finals of the Indian Wells. The Swiss player, who is a five-time champion in California, dominated the game and was able to ease past his British opponent 6-1 6-4 in just over an hour.

Federer, who is currently world number four, and who has yet to drop a set during his time at the tournament, saved all seven breaks points that he took on, and finished the game with 79% of his first serve points. Second seeded Rafael Nadal also pushed forward to the last eight with a relatively straightforward win of 6-3 6-4 over Filip Krajinovic.

The Spanish player will next be taking on Karen Khachanov following the Russians victory of 6-4 7-6 (7-1) against John Isner.

Edmund, who also won the Indian Wells second-tier Challenger earlier in the tournament, battled to serve during the opening set. He was broken for the first game of the match, and went on to a double break down before coming back at 5-1. The second set proved more difficult for the player as Edmund created three break opportunities as Federer served for the match, but was ultimately unable to make any use of them.