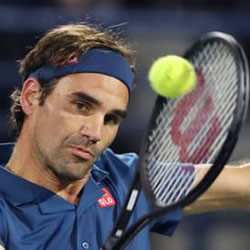 Roger Federer required three sets in order to best fellow veteran player Philipp Kohlschreiber while playing at the Dubai Tennis Championships. Federer managed to cruise through their deciding set, winning 6-4 3-6 6-1 against the 35 year old German during his first match since his Australian Open last 16 exit. The 20 time Grand Slam title winner has yet to lose to Kohlschreiber, winning all 14 matches in which the two have come face-to-face.

Federer is currently focussed on gaining his 100th ATP singles title after he moved on to 99 while playing at the Swiss Indoors last year in October. He is also now ranked seventh in the world, and second in terms of overall ATP victories, with only Jimmy Connors of America in front of him with 100. Federer is also going for a record eighth title in Dubai, which has served as his training base for a number of years during off seasons, which has given him the edge in Dubai’s harsher climate.

Earlier in the month, Federer confirmed that he would be making his return to clay for the Madrid Open; the player has not played on the surface since 2016. Meanwhile, fourth seeded Russian Karen Khachanov, along with seventh seeded Canadian Milos Raonic suffered defeat for the first round against unseeded opponents earlier in the event. 22 year old Khachanov lost 6-4 6-1 to world number 19 Nikoloz Basilashvili, whole Roanoic, 28,, was defeated by German Jan-Lennard Struff 6-4 5-7 6-4.