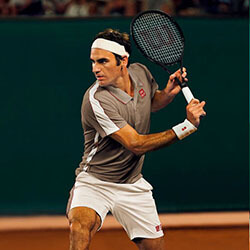 Roger Federer has announced his return to the 2019 French Open for the first time in four years in order to challenge both Novak Djokovic and Rafael Nadal for the winning title. Nadal is currently pursuing a record 12th Roland Garros title, while Djokovic is set to become the first man in the Open era to control all four Grand Slam titles at the same time. 37-year-old Federer missed the event in 2016 due to a back injury, and was forced to skip the last two clay court events in order to stay in good health.

Federer, who is a 20 time Grand Slam champion, recently reached the quarterfinals of the Madrid Open for the first clay court tournament he’s been involved in for three years. Talking about his progress, Federer stated that he felt good about the game and felt good about playing on clay. The player has seemingly gotten past his leg injury that had forced him to leave the quarter final of the Italian Open, and remained on point for the practice session he completed at the Philippe Chatrier show court that took place at Roland Garros.

World number one Djokovic is expected to provide the strongest challenge to Spanish Nadal, wile American Serena Williams is aiming for a 24th Grand Slam singles title for the women’s singles if she remains fit enough to take part in the upcoming event. Andy Murray will not be participating while recovering from injury.