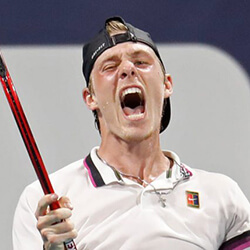 Three-time champion Roger Federer has progressed to the Miami Open semi finals after his recent straight set victory against Kevin Anderson. Swiss Federer, who last year was knocked out of the Wimbledon quarter finals by the 20th seeded, beat the 32 year old in under an hour and a half with a final total of 6-0 6-4.

The 37 year old will be now be taking on 19 year old Denis Shapovalov for the semi finals. The Canadian teenager has stated that it will be dream come true to face Federer.

Federer won the first set by the 26th minute mark, and continued to dominate the nervous Anderson for most of the match. The South African was 2-0 down for the second, but managed to make a comeback to level the score at 4-4, although a marathon 14-minute match ended with Federer claiming his fifth break of the match.

Canadian Shapovalov, who is expected to be a future Grand Slam winner, recently bested American Frances Itafo 7-6 (7-5) 6-4 6-2, reaching the semi finals. Talking about the upcoming match, Shapovalov said that it was a match he’d been looking forward to his entire life, and that the stakes are high, and it’s a dream come true for him. Shapovalov’s fellow Canadian Felix Auger-Aliassime, who is one year younger, is set to face defending champion John Isner for the first upcoming semi final. Federer has expressed his excitement for competing against the younger players.