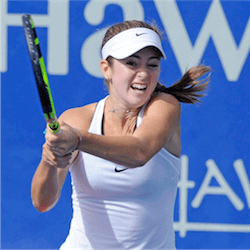 Second WTA 125K Tennis Series To Be Hosted In Hawaii

Tennis’ WTA 125K Series comes to Hawaii again on 19 November and this year the doubles draw has been increased to a 16 team draw due to the growing popularity of the event in Hawaii.  The Hawaii Open was staged for the first time in 2016 and is open to entries from professional female players only.

The main draw player list for this year has recently been announced and we take a look at some of the key players competing so you can pick who to wager on when you place your bets online at Crownbet.

28 year old Shuai Zhang is currently ranked no. 2 in China and is the runner-up of the 2016 Hawaii Open.  Zhang has won 22 singles titles of which 19 was on the ITF Women’s Circuit, 2 on the WTA Tour and the final one during a 125K Series challenge.  Her very first singles match in a Grand Slam tournament was won at the Australian Open when she defeated world no. 2 Simona Halep.

Rodina is the holder of fourteen ITF singles titles to date and achieved the ranking of world no. 74 in February 2011.  Her career kicked off in 2004 with the help of a wildcard entry into the first round of the Moscow tournament.  She was a mere 15 years old at the time and impressed the tennis world by taking a set from Elena Vesnina.

37 year old Francesca Schiavone turned professional tennis player in 1998 and achieved a career high of being ranked world no. 4 in 2011.  A year prior to that, she became the first Italian tennis player to win a Grand Slam event when she won the 2010 French Open singles title.  Since starting out, Schiavone has won 8 WTA titles in total.  She holds the record for defeating an opponent in the longest ever singles match, which lasted all of 4 hours and 44 minutes.

25 year old Japanese professional player Kurumi Nara turned pro in 2009.  During that same year she went on to win the All Japan Tennis Championships.  Nara is a force to contend with due to her patient playing style, edging into points gradually but with a great deal of stamina to boot.

22 year old Sachia Vickery from the United States has been identified as a player to watch.  She is currently ranked world no. 154th in singles tennis.  She has already won two singles tournaments on the WTA lower level International Tennis Circuit.