Serena And Venus Could Face Each Other 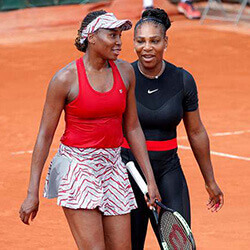 The US Open is ready to start, and this year’s event, which is being held in Flushing Meadows, New York, is already set to see some of Tennis’ biggest competitors fight it out on the court.

Serena and Venus Williams could very well be heading to their earliest grand slam meeting in two decades after it was announced that the two could be facing a possible third-round matchup. Which sister wins the match will then go on to face No 1-ranked Simona Halep in the fourth round of the tournament.

This year’s current US Open marks the first return to Flushing Meadows after missing the event last year while giving birth to her daughter. The 36-year-old has claimed six titles of her 23 grand slams at the US Open, and has been given seed number 17 by the US Tennis Association.

Venus, who has won two of her seven grand slam singles in New York, is currently seeded at 16th, and will be facing a tricky first round against Svetlana Kuznetsova.

Serena’s opening match will see her fight it out against 60th-ranked Magda Linette of Poland. If both sisters make it to the third round, they would need to face each other in a grand slam sooner than ever since Venus beat her sister in the second round of the 1998 Australian Open, which was their first head-to-head game on tour.

Since then, the two have played a total of 29 times, and Serena currently leads 17-12.